DISCLAIMER:
THIS BLOG IS FOR INFORMATION PURPOSES ONLY.
I DO NOT ACCEPT ANY LIABILITY FOR ANY INJURY OR FATALITY THAT MAY OCCUR ON THIS ROUTE AS A RESULT OF THE INFORMATION (OR MISINFORMATION) PROVIDED HERE IN.

Snakes and Ladders (and Tunnels)

Before starting I would like to point out the serious nature of this route. It is given the British Trad Grade of HVS which is probably quite accurate in describing the adjective danger of this excursion and the level of experience required before it should be attempted. This is not a route to get your cheeky first HVS tick, because it won't count. I cannot stress enough that this route should only be attempted by experienced climbers that are familiar with the dangers of climbing in these quarries and that fully understand the risks involved. I strongly recommend against taking novices or inexperienced climbers. Good life insurance wouldn't go a miss either. 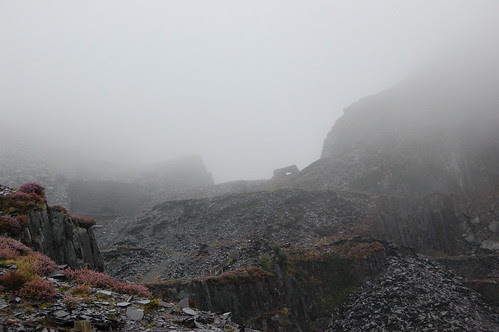 The route Snakes and Ladders (and Tunnels) is not an undertaking to be taken lightly. It takes you on a magical mystery tour of the Dinorwig slate quarry, thwart with danger, excitement and adventure that weaves through the relics of the old quarry sections. Starting at Dali's hole, through to the isolation of California, to the vast expanse of Australia, to the remoteness of the Lost World, into the depths of Mordor, until finishing finally past the void of Twll Mawr.

The voyage can be done come rain or shine. Although slate is slippery when wet!
All in all, a fairly quick moving party should be able to complete all the sections in about 4-5 hours accounting for faff, food breaks... and maybe getting lost.

The quarry is the property of First Hydro. If you are doing this route, you are trespassing.
Useful things to take:

You should really only be doing this if you are fairly familiar with the quarry and its layout already. I have been deliberately vague in describing the start of the route for this reason. Please don't climb over the large fence by Dali's Hole, it is possible to walk around the back. Please be discreet in areas that are in view of the footpath.

Go through the obvious tunnel overlooking Dali's Hole into California, carefully passing through Hades (small quarry on your left obscured by a large boulder at the end of the first tunnel). Once out of the second tunnel, on the left hand wall you should spy another tunnel about 15 metres up the wall with a very big chain dangling from its mouth. 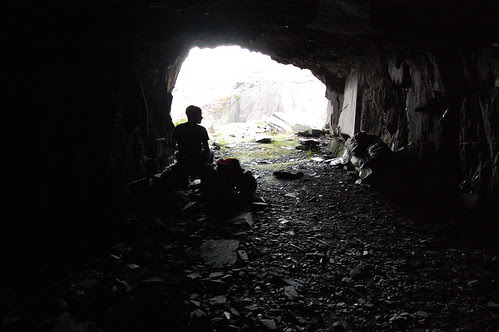 Looking out of Dali's Hole


Lead climb the chain, clipping into the links for safety. It may not be possible to clip in quickdraws as the chain is so thick, but big HMS Krabs work well. Lasso one of the three iron bars with a sling for protection if necessary. Climbing can be strenuous at the bottom but gets easier towards the top. Is a lot easier in stickes. Can be aided if you are a pansy.
Once at the top, take a moment to inspect how the chain is attached, it's a fitting appetizer for the rusty uncertainty ahead!
There is a solid bolt for an anchor on the left hand side (looking in) at the mouth of the shaft (not to be confused with the loose iron bar on the other side) that is useful for belaying. A cam can be placed additionally if you feel the need.
Once in the shaft. Walk to the end of it, to miraculously find yourself back to Dali's Hole area. Climb/Ab off the ledge. Precariously scramble up and rightwards (looking out of the shaft you just climbed out of) over to large slate boulders.
Scout around for a concealed tunnel, very well hidden behind slate blocks on the back wall. It takes time to find it. I would include a photo, but that's just cheating.
You'll know you have the right tunnel, because its small and awkward to step down into. There will be a wooden doorway with wire mesh on it. Don't use head torches. Just walk towards the light...

You'll emerge in Tasmania, the bottom level of Australia. From here there are two options. Looking out of the tunnel you want to get to the back right part of this quarry.
It is possible to either go along the left side of the quarry, past the oil drum glacier gaining terraces (not gone this way, but is described in the UKC topo) 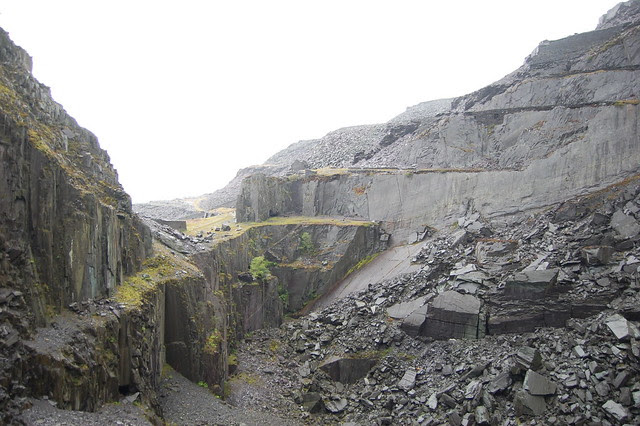 Oil Drum Glacier up the left side of Australia

Or go right, marching up scree at the right hand side of the quarry. There is a vague path up a scree mountain that is very loose and very sketchy but can be done if you are steady footed. Great care should be taken on this section. A word of warning, there are no fixed ropes in this section. Do not confuse loose dangling ropes for being anything more than discarded tat. 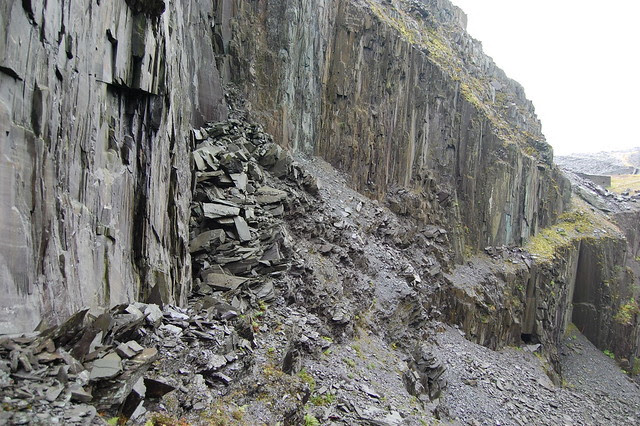 If you went right around the quarry you eventually you should arrive at the safety of a flat vegetated plateau, where your first of many rusted ladders awaits you. Be careful of the step off at the top.
If you went left, you will end up a level higher than if you went right. So don't have to climb the slanting ladder (See photo below) The First of Many Suspect Ladders 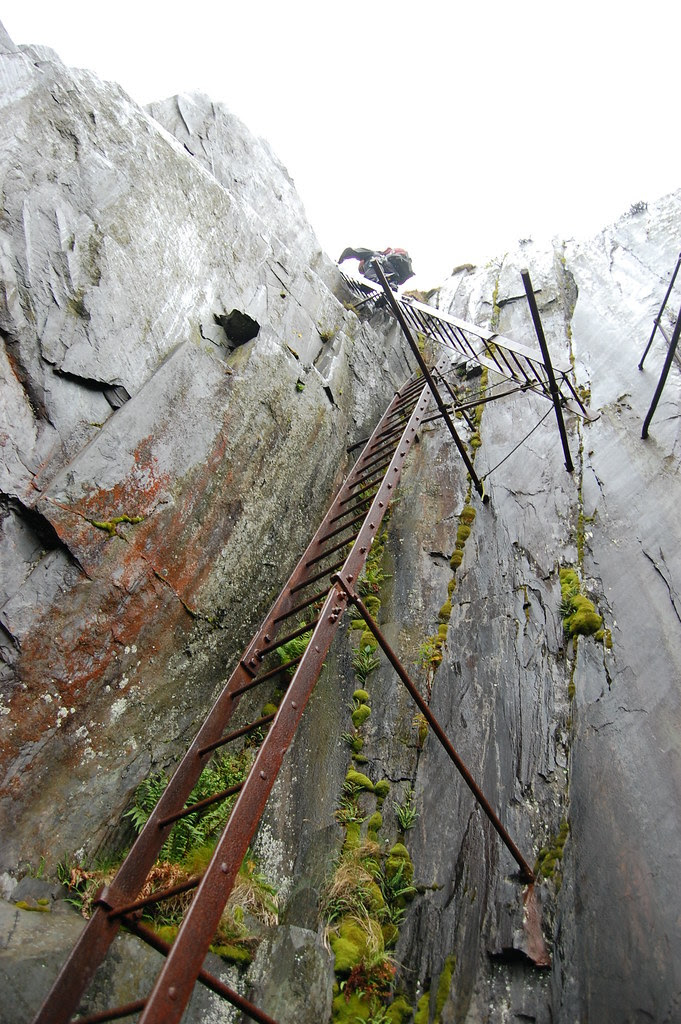 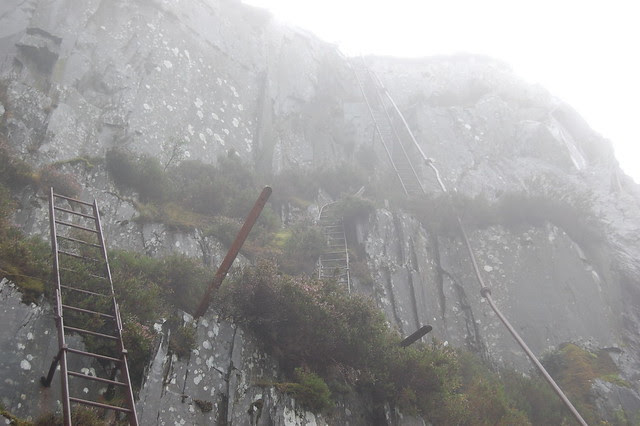 Last Set of Ladders to the Top Terrace

This part requires you to climb a series of jumbled, slanted, twisted ladders, each ladder gains you to pleasant grassy terraces. There should be four ladder sections in total (three if you went left around the quarry). The last ladder has a rusty pipe running parallel with it (see photo above). You can be roped up for the ladder sections, but not worth the faff and am not sure if half of the rungs on them if clipped would hold a fall.


At the top take time to enjoy the view of the quarry and Lanberis Pass if it is a clear day and give your self a pat on the back. You are about half way now. 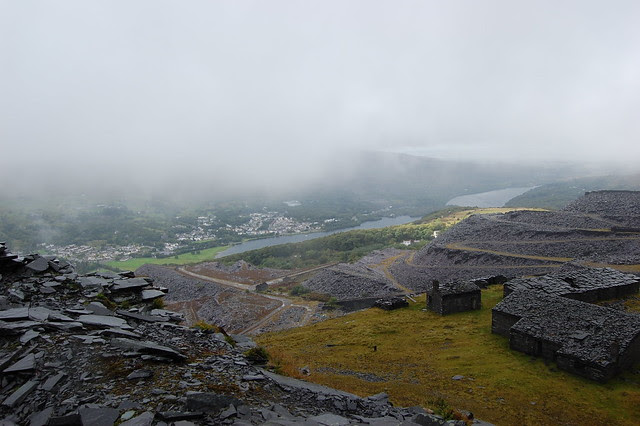 View of Llanberis from the Top

Follow the terrace to the right (looking onto the terrace from the last ladder), until you get to a circular slate chimney. If you look down from here you should see a large slate building (see pic above). This is the next stop. It can be accessed by walking down the a slate staircase (or the scree slope to its right... safer in the wet) found by continuing along the terrace .
The large slate building is a good rest stop for a bite to eat, especially if it's raining. Until recently the quarry workers blazers from the closure of the quarry in the 1960s were still hanging up on the wall of this hut, but some idiot thought it would be a good idea to set fire to them. Thanks.

Go back to the slate staircase used to descend from the top terrace and follow a scree path down the hillside. You should see the California Quarry on your right hand side behind a small slate hut, its worth a look down into the quarry at the tunnel and chain you previously climbed up all that time ago. 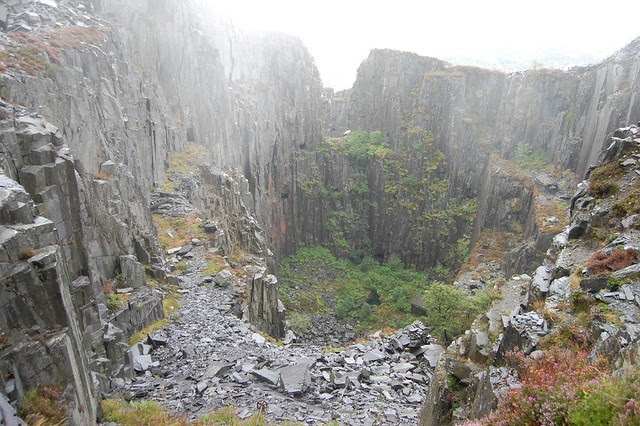 
With California on your right, go left across a flat flowery section through a break in the quarry wall, to the entrance of the Lost World (if you see a pushed over, knee height wire fence at the entrance, you're too high still, go down a level). Welcome to the Lost World. Eye two tunnels at the very bottom of this quarry. One of these leads to Mordor, where some say it is even possible to take a journey to the centre of the earth.
Locate the abseil station that is overlooked by Dinowrig Unconquerable (E3 5c). There are two bolts with mallions attached. A 50m rope with stretch should just see you to the bottom. But is worth putting knots at the end of the rope.... just in case. Then find the second abseil station built on stacked blocks to get lower still, situated about 30m to the right (looking in) of where you just abed down from, There are insitu slings and a mallion. Descend to the bottom level by down climbing a set of ladders that is found by walking to the right along this level, at the bottom you'll emerge into the jungle of the Lost World, complete with crocodile pond. Cross the pond at the bridge and go through the short left hand tunnel. 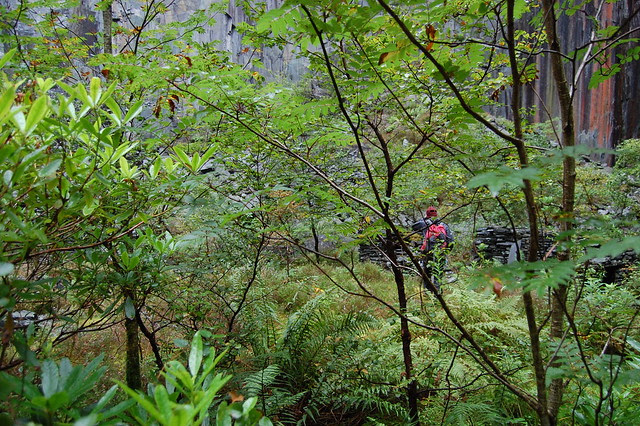 The Jungle of the Lost World

Aptly named? follow the left hand edge of this circular quarry. Being careful not to fall in the middle... a trip you won't be returning from. 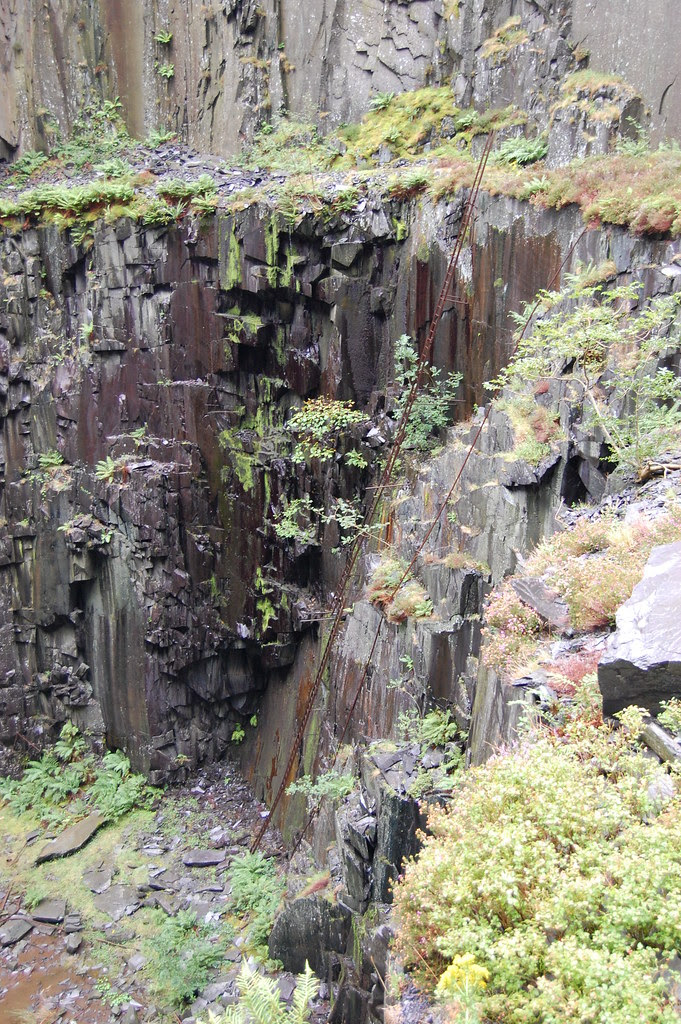 The Great Ladder of Modor


Climb up and out of the quarry, up two very very doggy looking ladders, where missing ladder rungs have been substituted with manky rope. It is also possible to pull the second ladder away from the wall at the bottom of it so take care when stepping across from the first ladder.

You should emerge at the Kyber Pass, and find yourself looking down into vacuum of Twll Mawr. Those with a keen eye might be able to distinguish the line of The Quarryman (E8 7a) on the far wall. Climb up one final last ladder on the left hand wall. Walk along this path till progress is halted by what is known as 'Death Bridge'. Do not cross the bridge (photo below). Instead follow a pipe, under some hanging chains that goes up and over the scree mound, continue along and down the mound to the other side of the bridge. 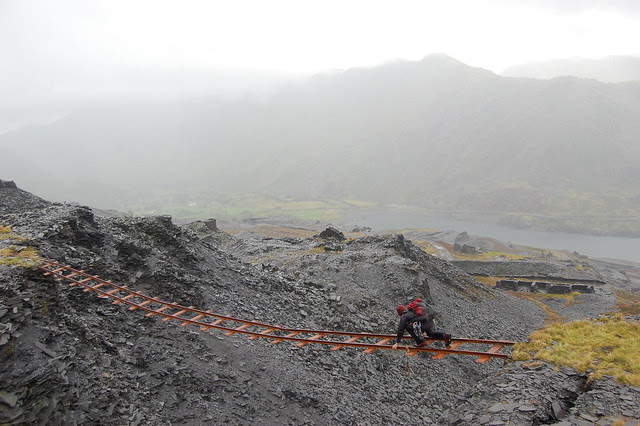 Go through the building that houses a large pulley drum system, once used to transport carts of slate down the hillside. Walk down the tracks, down the hill to the safety of the foot path. 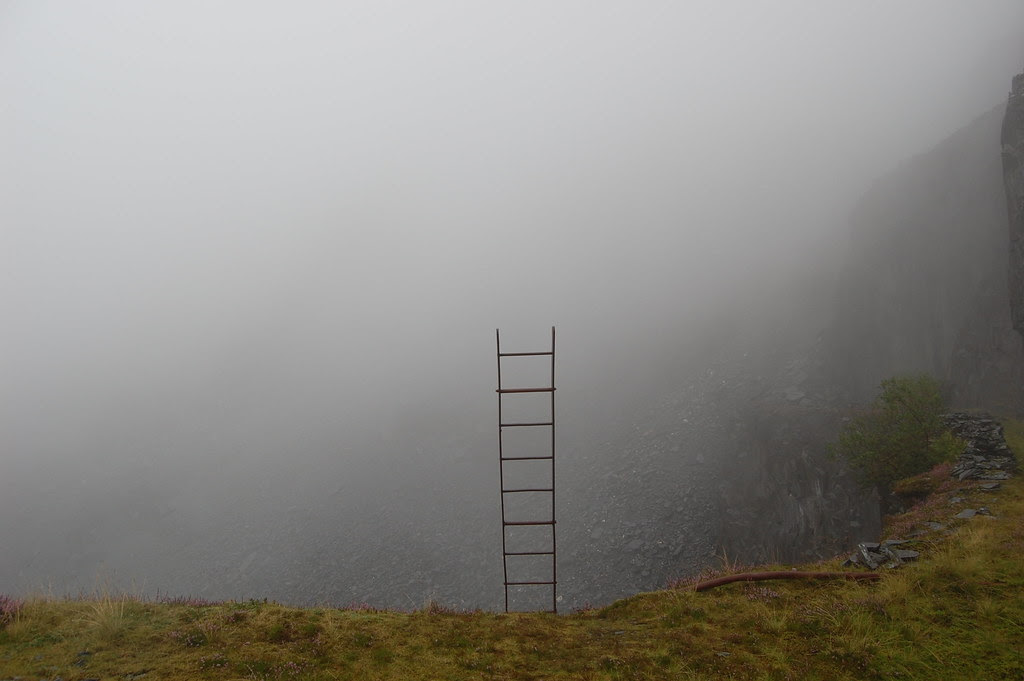 With thanks to my climbing partner Rust for all his help
Posted by Kit at 16:20 19 comments: 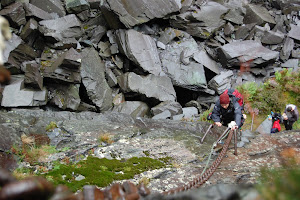 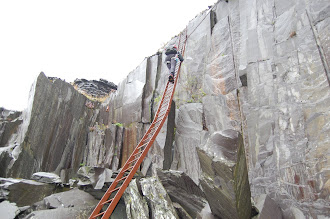 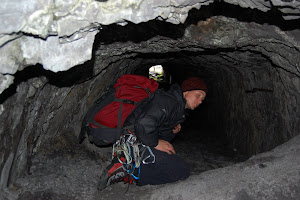